It is with heavy hearts that we write tribute to our role model, mentor, colleague and friend, Irene Hirano Inouye. Irene left an enduring imprint on our work as leaders in philanthropy and non-profits and in the lives of so many Asian Americans, Native Hawaiians and Pacific Islander leaders (AAs and NHPIs) and communities, across the country, from the Atlantic to across the Pacific. We feel honored to have worked with her and to call her our friend.

We want to give you only but a small window into the tremendous legacy and body of work Irene has left behind. As a former Board member and the CEO of APIAHF, we are grateful that Irene was a founding APIAHF Board member in the mid-1980’s, when she was the executive director of T.H.E. Clinic in Los Angeles. Irene had deep roots in women’s health, health equity and reproductive rights starting with a women’s clinic in South LA more than 40 years ago.

Her commitment to women’s leadership and that of AAs and NHPIs extended long and far. She was the chair of the California Commission on the Status of Women, under Gov. Jerry Brown, in his first term in office.  Often the only woman of color and sometimes only woman at leadership tables advocating for women’s health funding, women’s rights and gender equity.

She founded the Asian Pacific Women’s Network in LA in 1980 as a voice for AA and NHPI women’s leadership and advocating for the community. Organizations were launched in Fresno (Central California Asian Pacific Women) and the Bay Area, (PAAWBAC) that still exist today and later a national coalition, the National Network for API Women, advocating for inclusion of Pacific Islander women in women’s leadership and gender equity .

She continued to forge this path as a leader in philanthropy, chairing the Board of Trustees at both the Ford and Kresge Foundations, in non-profit sector leadership, as CEO of the Japanese American National Museum and as founder and CEO of the U.S. Japan Council.

In the early years, Irene was often the lone woman or one of a small minority at leadership tables, while creating a path for other women to join her on boards, commissions and other leadership opportunities.  We both feel a debt of gratitude to Irene for her insistence on making sure other women and AA and NHPI leaders followed her in key governance and leadership positions.

We have many memories of her laughter, her incredible discipline and always “get-to-work” attitude. We came to know well how she embodied grace under pressure, in the toughest circumstances and hardest of times, usually with a smile.

Irene could always be counted on to respond to an urgent call seeking advice and through the years we’ve admired her drive, grit and determination to build and strengthen mission-driven institutions in philanthropy and the non-profit sector.

Irene left us too soon, but she’s inspired us with purpose-driven leadership and her dedication to work harder to make the world and community a much better place. Thank you, Irene. 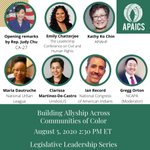