“COFA communities have contributed to our nation’s security, pay taxes and play a role in driving our economy, but they are not eligible for many of the programs that their tax dollars support,” said Kathy Ko Chin, president and CEO of APIAHF. “We thank Representatives Cárdenas, Radewagen, Gabbard, Womack, Case and Sablan for correcting a nearly 25-year error, by working to restore Medicaid eligibility to COFA individuals. We hope that the bill will continue to receive bipartisan support and will be passed in the House and Senate.”

In 1996, Congress inadvertently excluded COFA individuals from the list of legally present non-citizens eligible to qualify for certain federal benefits. Since then, COFA individuals have been excluded from qualifying for Medicaid. The denial of Medicaid has led to poor health consequences for COFA communities, many of whom suffer from serious chronic conditions and health disparities, including effects from exposure to nuclear weapons testing conducted by the United States in FAS nations. In the absence of federal support, states with large and emerging COFA populations have shouldered the costs of providing care.

This legislation is the companion namesake to Sen. Mazie K. Hirono (D-Hawaii) and Sen. Brian Schatz’s (D-Hawaii) bill, S. 2218, which was introduced in July.

As one of the largest stimulus packages in our nation’s history, the #CARESAct still leaves vulnerable immigrant populations at-risk. Read our response here: http://bit.ly/APIAHFPR032720 #COVID19 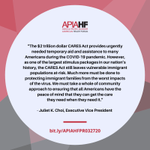