WASHINGTON—Over the last few weeks, again, we witnessed the loss of Black lives due to racism and police brutality. Ahmaud Arbery, Breonna Taylor and George Floyd were not the only victims of anti-Black actions. These recent killings are only compounded by the tens of thousands of deaths in the Black community due to structural racism and the disproportionate impact of COVID-19. It is beyond time to stand up for Black lives and for justice.

As an Asian American and Native Hawaiian Pacific Islander organization, it is essential for us to communicate, unequivocally, that Black Lives Matter and that we must stand, shoulder to shoulder, in solidarity with our Black brothers and sisters. We call for justice for George Floyd’s family, including the immediate arrests of all of the officers involved in his death and to recognize and callout the Asian American officer that stood by to allow the killing, instead of fulfilling his sworn duty to protect.

Earlier this week, we released a joint statement with our Racial Equity Partners: Advancement Project, DEMOS, Faith in Action, NAACP, National Congress of American Indians, National Urban League, RaceForward and UnidosUS to stand in solidarity with the Black community.

George Floyd becomes the latest in a long and growing line of members of our communities who have needlessly died at the hands of police acting outside of the bounds of the law and their sworn duty to uphold and protect the public. This epidemic of racialized violence must stop, and it must stop now. Bringing it to an end will require the affirmative commitment, solidarity and sustained action of all Americans, from grassroots advocacy to the ballot box. We call for:

We must call out structural racism and declare that racism is a public health crisis. We must acknowledge that it is critical that systemic change occur and that “we the people” include everyone, not just the privileged. We have a duty, not to just bear witness, but to speak out.

Want to strengthen trust with your team and partner organizations? Join us for a FREE interactive workshop: Building Trust Through Leadership on July 14 @ 12pm PT/ 3pm ET. Go to: https://p2a.co/lUZILYU 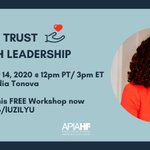