WASHINGTON – On August 12th, the Trump Administration’s Department of Homeland Security announced it will be publishing its finalized public charge rule, continuing its history of actions and policies harmful to immigrant communities.

The finalized rule change, which is expected to be published on August 14, 2019, will go into effect on October 15, 2019. These changes will likely have a chilling effect – not only increasing the number of immigrants denied lawful permanent residence based on their use of certain government services, household income, and other criteria, but also dissuading families eligible for Medicaid and other public benefits intended to support their health and well-being from availing themselves of those benefits.

Despite more than 250,000 individuals submitting comments opposing these proposed changes, the Department of Homeland Security’s decision to move forward with this rule – along with the ICE sweeps in Mississippi and ongoing family separations at the border – is just another example of how the Administration’s words and actions seek to undermine the rights of and opportunities available to immigrant families.

The proposed changes to the public charge rule punish low-income, immigrant families of color who access essential services, such as nutrition assistance and health care. The rule favors immigrants who have completed higher education, speak fluent English, and are younger. Obviously, these proposed changes will negatively impact the number of people who are able to get a green card, and in turn, impact those who will later be eligible for U.S. citizenship. This is another shameful attack on working- class immigrant families who, once they became citizens, would be able to vote and fully participate in our democracy.

It is beyond time to stand up for Black lives and for racial justice. https://bit.ly/APIAHFPR060220 #BlackLivesMatter #WeVoteWeCount 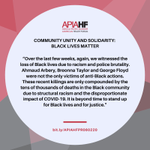