WASHINGTON – Last Friday, President Trump issued a Presidential Proclamation that would deny visas to many categories of immigrants unless they have approved health insurance or can prove they have the financial resources to pay for reasonably foreseeable medical costs. The Proclamation applies to individuals abroad seeking immigrant visas, including spouses and parents of U.S. citizens, and it could impact families who are trying to reunite. It does not affect immigrants already in the U.S., lawful permanent residents, asylum seekers, refugees or children.

“The Trump administration’s continued xenophobic agenda and attack against immigrant families is unacceptable and un-American,” said Kathy Ko Chin, president and CEO, Asian & Pacific Islander American Health Forum (APIAHF). “APIAHF and its partners will continue to fight against regressive policies that threaten the wellbeing of all families and communities in our country.”

The Proclamation follows the August release of the public charge rule that blocks immigrants from obtaining lawful permanent residency by intimidating communities and families that are eligible for programs like Medicaid from using them. Over 250,000 individuals filed official comments opposing the public charge rule.

The Trump administration has defended its proclamation under the guise that the Proclamation would protect the availability of healthcare benefits for Americans and address uncompensated care. However, the Administration has a history of making health care more and more difficult to access for Americans, including immigrants. The Trump administration has supported efforts to repeal and undermine the Affordable Care Act (ACA), including creating barriers for lawfully present immigrants from purchasing health insurance on the Marketplace. Under this Administration, the uninsured rate for noncitizen children under the age of 19 increased 2.7% in 2018, due to greater restrictions and fear tactics.

“The Proclamation would disproportionately impact Asian American and Pacific Islander families seeking to reunite with and bring over parents and children, who already face long wait times,” said Juliet K. Choi, senior vice president for government & external relations, APIAHF. “The Administration is doubling down on effectuating a chilling effect, intimidating immigrant families from accessing vital health services and keeping families separated. These actions and policies are counter to our American values of keeping families together and communities well and safe.”

The Proclamation takes effect on November 3. The public charge rule is currently being challenged in federal courts and, unless blocked, will go into effect on October 15.

We are working w/ @CDCgov on an infection prevention & control (IPC) training initiative for frontline healthcare personnel. Your responses will inform decisions on the development & delivery of this training to best meets your needs. Take 10 min & go to: https://bit.ly/3dMZfnU 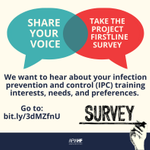