APIAHF has long prioritized the collection and reporting of data by disaggregated AA and NHPI groups. In 1985, U.S. Department of Health and Human Services Secretary Margaret Heckler issued a landmark report on Black and minority health. While the “Heckler Report” identified disparities in key health outcomes between whites and other minority groups, it also concluded that Asian American, Native Hawaiians and Pacific Islanders were healthier than other minorities. This assertion was based on a small amount of aggregated data collected for these groups. In response to this report, a group of AA- and NHPI-serving health care providers, community leaders and others – who knew from their experiences that Asian Americans, Native Hawaiians and Pacific Islanders also experienced disparities – came together to develop recommendations and strategies to address the dearth of health data for these communities. This gathering laid the groundwork for the formation of APIAHF, which has since remained at the forefront of advocating for the collection and reporting of disaggregated racial and ethnic data in order to accurately portray the health status of our communities.

Unfortunately, a small group of opponents to AB 1726 have presented a misguided view that the collection of disaggregated racial data hurts and divides communities. They overlook the evidence that health disparities between racial groups clearly exist. Disaggregated data, which is already collected by the U.S. Census Bureau and Centers for Disease Control and Prevention (CDC), has been critical in identifying numerous disparities. Census Bureau data from before the passage of the Affordable Care Act in 2010 showed that while the overall uninsured rate for Asians was around 15 percent, certain sub-groups had much higher rates—for example, Cambodians at 21 percent, Bangladeshis and Koreans at 22 percent and Pakistanis at 23 percent. CDC data has also revealed disparities in health conditions. For example, 2011 data indicated the cancer mortality rate of Japanese women is nearly twice that of Asian Indian women. Data from 2013 showed an overall smoking prevalence among Asians at 11 percent, but a wide range of rates across sub-groups, from 8 percent among Chinese and Asian Indians to 20 percent among Koreans.

The public benefit of having disaggregated data is clear. When we know which disparities exist, we can work together to develop tailored interventions and strategies to appropriately allocate resources to address the problems. Rather than creating divisions, this important information helps us to identify the actions and solutions that will promote health equity across all communities.

As an advocacy organization with the mission to improve the health of Asian Americans, Native Hawaiians and Pacific Islanders, we support efforts to show a clearer picture of the diverse communities we serve. Unveiling disparities within our communities is one important step in the fight to eliminate inequities and ensure we give real effect to the civil rights that protect us all. 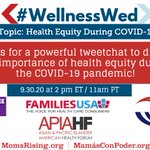